Never before had there been a king like Josiah – who turned to the LORD with all his heart and soul and strength – obeying all the laws of Moses. And there has never been a king like him since. (2 Kings 23:25)

Here’s an excerpt from my sermon-in-progress. It picks-up with 2 Kings 22:8:

During the restoration process the Book of the Law was found in the LORD’s Temple by the high priest Hilkiah. He gave it to Shaphan – the court secretary, and he read it. He then went to Josiah with the scroll, and he read it to him. 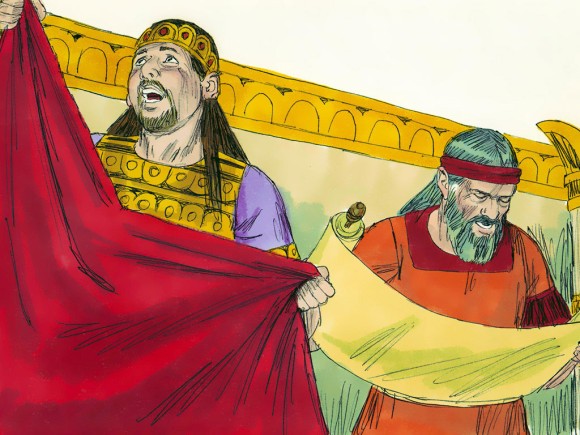 When the King heard what was written in the Book of the Law – he tore his clothes in despair. (The King said), “Go to the Temple, and speak to the LORD for me – and for the people – and for all Judah. Inquire about the words written in this scroll that has been found. For the LORD’s great anger is burning against us because our ancestors have not obeyed the words in this scroll. We have not been doing everything it says we must do.” (2 Kings 22:11,13)

See the King – Josiah – feared the LORD. He tore his clothes in sorrow – in pain – knowing that the LORD had great anger against the land and its people for not obeying the Law. Josiah realized that even after 10 years of righting the wrongs of his forefathers – it was not enough. There was still much work to do to reform the land of Judah. There was much non-belief in the LORD in the land. The Law was not being followed by the people of the land. There are great penalties for that.