My first car was a 1980 Chevy Citation. I bought it used with my own money as a 16½-year-old in early-1984 as a Junior in High School. It was a beige 2-door hatchback. It looked very much like the car that is 2ND from the bottom in the ad above.

I was a “paper boy” back then. Once I bought the car my delivering of the newspapers around my neighborhood early in the morning became so much easier. It got a major upgrade. I went from a 10-speed bicycle that often got flat tires to an actual car !

I also drove my car to school sometimes, but not all the time. I’d get made fun of for my “cheap used car”. I lived in a rich neighborhood at the time, and my high school was one of the top in the nation as far as income of the parents of the students, so naturally the students were rich too. My parents were not rich, so I wasn’t either.

On June 12TH 1985 I shipped-off to Air Force Basic Military Training at Lackland AFB in San Antonio Texas. 2 months later I was at Tech School at Chanute AFB in Rantoul Illinois. Right around Labor Day Weekend my Dad and my little brother drove my car 700 miles from McLean Virginia to Chanute AFB. They essentially delivered my car to me. I showed them the base and the local area, they spent the night at a local hotel, and then they flew back home the next day.

Here’s a photo of that day. My 10-year-old brother took this picture: 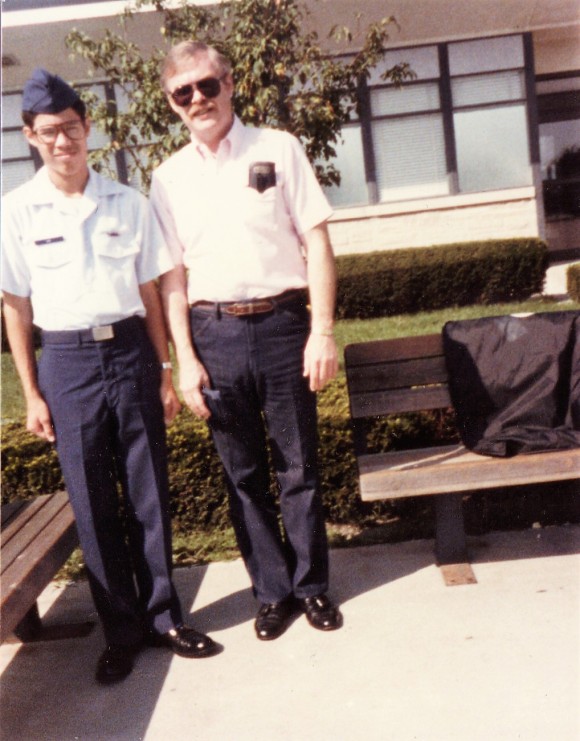 Unlike high school I suddenly became popular in my dorm when people saw me with car keys and an actual car. Everyone wanted to be friends with me. People wanted to be advised whenever I planned to drive off-base to visit places in Rantoul or Champaign.

In October 1985 I received notification that after I graduate from tech school my first permanent duty station would be – overseas in the United Kingdom. I was enjoying the final month of my car. After graduation I drove my car back home to McLean Virginia, and then about a week later I shipped-off to England. My dad sold my car.