WEEKEND GRAB BAG O’ THOUGHT:
Well Tropical Depression # 16 / Tropical Storm Nicole has come and gone. It’s a tropical system that my weather models accurately visualized some 9 days in advance. Early on they depicted a Category 1 or 2 Hurricane over or just off the coast of South Florida, but then they quickly backed-off on that scenario and simply brought a Tropical Storm over us. In actuality we didn’t receive any Tropical Storm force winds at all, as they were displaced some 250 miles east of the center of the storm. Here in Homestead we received about 5½ inches of rain. I forecasted 6 inches. Portions of the Upper Florida Keys actually received over a FOOT of rain !  For those of you who don’t live in South Florida we can handle 6, 9, and even 12 inches of rain in a single day or two. It creates a short-term nuisance, but then it drains away. We’re tough like that. We’re also very green right now after a very hot and dry Summer. Come and check us out during this upcoming Winter season once you start to shiver up north. We’ll be open for business. Our beaches never close.

BEST LUNCH OF THE WEEK AWARD:
Shiver’s BBQ – BBQ Beef Brisket, French Fries, Collard Greens, Garlic Bread, Sweet Iced Tea. I truly believe that this is the best BBQ joint that you’ll find anywhere here in deep South Miami-Dade County Florida. They’ve been in business since the 1950s, and I believe that they’ve been at the same location ever since then – at the SE corner of U.S. 1 and SW 280TH Street in Naranja Lakes. Good service. Good food.

THE FORTUNE COOKIE MESSAGE OF THE WEEK CLUB:
– It is much more difficult to judge oneself than to judge others.

THOSE CRAZY CRAZY CATS:
Here’s a homemade video featuring two cats – one on the left that’s normal – and one on the right that’s a lunatic. The one on the right marches to his own beat. He’s got no cares and no worries. He the life of the party. The one on the left (who remarkably looks very much like my own legendary cat from the 1980s and 1990s – ‘Fluffy’) is just chillaxin’, but after awhile he feels the need to get away – far away – from that crazy cat. Enjoy:

BLATANT PROMOTION:
Tomorrow night here on the blog it’s the 101ST edition of my continuing saga that is the ‘Saturday Night Retro’. I’ll be flashing back 14½ years ago to the Spring of 1996. The more things change – the more they stay the same. I’ll also feature one of the greatest rock songs ever made – and a big hit back during that memorable era in my life. In the meantime don’t forget that you can follow me on Twitter to see what’s on my mind. Have a wonderful weekend my friends. I hope to see you out and about ! 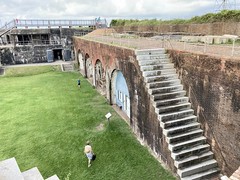