Buddy Roosevelt Day is my brother’s and sister’s-in-law soft-coated Wheaton Terrier dog. He’s 8½-years-old, so that’s nearly 60-years-old in dog years. He was born in Orange Park Florida (near Jacksonville), and he was discovered in a pet store by my brother in October 2001. Incidentally Roosevelt was his original name, and now it’s his middle name. As the story goes my brother did not pick Roosevelt out. It was actually the other way around. Roosevelt saw my brother walking around the store, and the dog decided right then and there that he would be going home with my brother – and so he did. 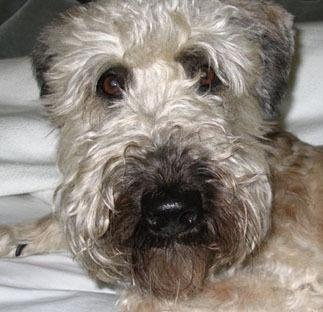 And here’s Buddy from this past Halloween as Super Buddy:

I'm 54 years old. I've been online for the past 28 years - starting with my own dial-up bulletin board system in 1993 - and continuing with AOL, my own dot.com web site, Myspace, Wordpress, Twitter, Flickr, and Facebook. View more posts